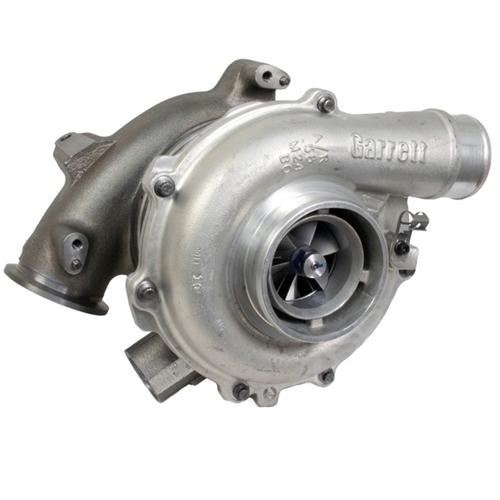 Garretts compressor wheel testing dictates 1 million cycles prior to the introduction. This testing prevents issues such as low cycle fatigue (hub burst/ wheel splitting in half). A wheel may exceed life expectancy but is at risk for premature failure if reused. Analysis of failed rebuilt units shows micro-cracks in compressor wheel bores.

The Solenoid Control Valve utilizes stricter control parameters to regulate oil flow through the unit. These controls minimize the amount of oil directly to the turbine end seal to reduce turbine seal leakage.

The multiple cycles of the 6.0L application can cause high cycle fatigue of the turbine blades. When a 6.0L turbocharger is reworked it is unknown how many cycles are on the turbocharger which can lead to premature failure. Extended cycles can cause tip failures which can be mistaken for foreign object damage.

All new Garrett 6.0L Replacement turbos contain the up-dated center housing with a machined recess. The machined recess helps vent the moisture that could settle under the unison ring and minimize the corrosion in the contact area between the ring and housing. The machined recess allows toxic liquids to bypass the delicate variable geometry mechanism to reduce buildup and interface friction. Brand new units feature these upgrades for extended turbocharger life on 100% of all units.

The leading cause for replacement is corrosion within the VNT Mechanism. Operating conditions of the 6.0L engine cause the turbo VNT mechanism to wear significantly in a normal lifecycle. Rebuilt units that salvage the mechanism can shorten turbo life. All new parts solve these problems.

This is the perfect stock replacement or upgrade repalcement for the 2004-2007 6.0L Power Stroke. Built from a stock OE unit, our trained technicians disassemble, clean, and inspect before machining...

This is the perfect stock replacement or upgrade repalcement for the 2004-2007 6.0L Power Stroke. Built from a stock OE unit, our trained technicians disassemble, clean, and inspect before machining...

Built from heavy duty aluminized steel our Performance Series exhaust systems offer a value price without compromising on the quality built into every component. While the seams are a major point of...