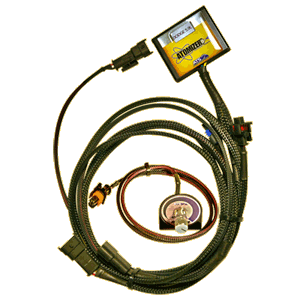 Description
ATS Atomizer Power Module - 2007-2011 Dodge 6.7L
The ATS Atomizer controls engine fuel rail pressures in order to maintain an optimal volume of fuel to the injectors. By doing this, the fuel droplets are introduced into the cylinders at the smallest size possible and create an efficient burn when mixed with air and combusted. Until the ATS Atomizer, pressure boxes have had a reputation for being hard on fuel systems; causing leaks, cracked injector bodies, blown seals, and poor driveability. The initial idea was great, but the execution was poor. However, that is no longer the case. The Atomizer communicates with factory equipment to drive fuel pressure up, based on engine load instead of just a fixed graph. The advantage is that it not only saves the fuel system from constant excessive pressure, but it will also retain factory-like driveablity, with substantially better top end power, lower EGTs due to proper fuel atomization, and better fuel mileage. The Atomizer also controls MAP voltage to prevent overboost codes just like a Boost Fooler.
Engineering Matters:

ATS Atomizer Power Module 2003 Only Dodge 5.9L  The ATS Atomizer controls engine fuel rail pressures in order to maintain an optimal volume of fuel to the injectors. By doing this, the fuel...

Prevent costly transmission damage with the ATS 3010212326 Billet Aluminum Filter Coupler. From the factory, your 2007.5-2017 Dodge 6.7L Cummins 68RFE Transmission is equipped with a plastic filter...

The best way to keep your transmission cool is with aluminum finned extra capacity transmission pan, such as this unit from ATS that holds an additional 4.5 quarts over the stock pan. This is a...

There are many things that need to be understood about the RAM 68-RFE transmission . This transmission was originally designed to be very inexpensive to manufacture. This approach forced the original...